I need a new Twitter Reply Rule. I read this article on TechCrunch, Twitter Plans Changes To @Replies And Other Confusing Rules. My takeaway from this article was in this paragraph:

Similarly, it’s common to see less-savvy Twitter users accidentally start tweets with someone’s @name. This makes the tweet a reply that only shows up to their mutual followers with the people they mentioned. Users have to know to put a . or different character other than @ at the beginning of their tweet to make sure it goes out to all their followers. Twitter could give some obvious visual indication to people about whether they’re about to publish a tweet or a reply. 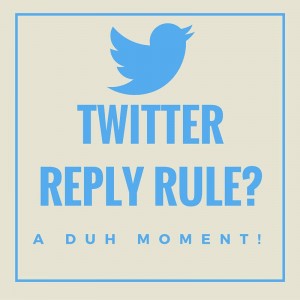 What was that? A Twitter reply rule? My current standard operating procedure (SOP) when I send a thank you tweet for retweets or adding me to a list is to start with their @name. My thank you is seen by the tweep with the @name, but not by all their followers or all my followers. Take it a step further, I usually stack my thank yous and schedule them a couple days per week with as many as 3 @names in a tweet. Wow, was I doing this wrong. Here is the

Here is the Twitter Reply Rule that I am going to start using:

When sending thank you’s, add a . before the @name.

It will be interesting to see how this affects the statistics for a thank you tweet. I will probably up date this post in 2 weeks if I notice a significant change in the statistics.