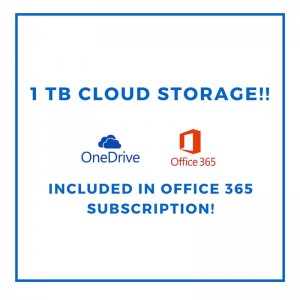 If you have a subscription to Microsoft Office 365, you get 1 TB of cloud storage with Microsoft OneDrive.

Here is the issue. About a year ago I bought a 15″ MacBook Pro. I wanted 16GB of RAM and an i7 processor. To keep the price under $2,000, I ended up with a 250GB SSD drive. I was leery about this because I am responsible for converting a lot of books into ePub’s and KF8’s. Some of the graphic novels that I process are almost 2GB files. But, I was able to setup a workflow where only the current books were on the drive and I did not have a space issue until this past week. Ironically, I discovered the issue while updating to Microsoft Office 2016.

Being frugal (aka cheap), I knew I had 1 TB of storage with Microsoft OneDrive with my Microsoft Office 365 Personal, so I decided to give it a try. I easily installed OneDrive on my mac and set up a OneDrive folder. I dropped a bunch of stuff in the folder and gave it time to sync. Once all the files synced with Microsoft OneDrive, I deleted the files on my mac. I am now using the OneDrive web interface and the save/open options directly in Office Apps to upload, save, and open files to OneDrive. I have already saved 60 GB of space on mac.

I have an active QuickBooks Consulting business and I have setup one of my QuickBooks Enterprise clients on a hosted solution by Right Networks. The solution Right Networks offers is a little pricey, but it gives everyone easy remote access to QuickBooks through Microsoft Terminal Services. The added bonus is the client is mixed PC and Mac and there is a native Microsoft Terminal Services App for Mac. There is not a QuickBooks Enterprise App for the mac. Since Microsoft OneDrive is part of the open/save screen in Excel, moving files on and off RightNetworks is very easy.